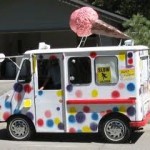 Today I have one of those “mom stories” that incorporates all of the above…filled with both shame and pride in my beloved kiddos:

My daughter and son have been wanting to have a lemonade stand all summer….  and we just haven’t made the time to do it, until the other day after school.  Finally, the ‘impromptu moment’ had arrived.  “Lets do it TODAY mommy!!!  We got the time!!!!  I want to make MONEY!’ (Son chimes in….) “Me too, ME TOO!!!!”

Now because we are lazy, impulsive and unprepared, we start to problem solve around not having any supplies for this shindig.  (ie:  no lemonade fixings, no cups, no pitchers to even hold the lemonade, no signs, no table.)

Here’s how it played out:

With dilapidated pathetic 8X10 computer paper, my daughter wrote a sloppy message in pen that truly I couldn’t even read from a few feet away.  We decided to throw a box of Popsicles from last summer in a Styrofoam cooler on an old freezer burnt bag of ice from last summer in a wagon and called it the traveling Popsicle stand.

My daughter led the way pulling the wagon.   My son stumbled behind her and held up the sign, now crumpled and falling out of his hands at times as he fumbles with a Popsicle spilling all over himself. (The boy just HAD to have one….there goes one sale)  I tried to linger back a few hundred feet, holding my head down in both embarrassment and discomfort about this whole thing.

My daughter starts the mission with a voice louder than those tornado sirens you hear, she could drown out any ice cream truck in a 10 mile radius:

“Sorry, no money.” A sweet couple says as they walk by, chuckling to one another.

She is yelling louder and this has been going on now for a good twenty minutes.  My son is now done with this project.  He starts to whine and drag his feet….

Still no sale.  Only passers by smiling that uncomfortable smile as they watch my daughter making the sales pitch of her lifetime.

I have now turned at least 15 shades of red and my sweat drips down my brow, as I literally am laughing so hard I cry.  Total humility at it’s finest.   But I tell ya, the kid is truly cracking me up!  I am genuinely enjoying this awful display of public exposure.  This is true motherhood, isn’t it?  Allowing your children to venture on their own while lingering behind them in case they fall.  Watching them make a fool out of themselves, and they still go on.  My ego wanted to run home, hide, lock the door and pretend I didn’t know my kids.  The mother in me couldn’t help but be proud of the spirit and courage in which my daughter (and son to some degree) pursued this adventure.

My sister drives up around the bend to support my children’s “business”, thank God!  (I asked her to come possibly contribute…)  We had been out for an hour now with not ONE sale.  My sister makes their day with a sale of a lifetime, buying two Popsicles for 4 bucks.  While my sister and I are talking, my daughter notices about a dozen construction men working on building a house down the street…

I continue to chat with my sister as I watch my daughter run with her wagon to this construction site and hand out Popsicles to the men in hard hats that have now come down from the roof.  I watch from afar, as my heart glows with pride.  I love that she could just run up to a bunch of strange dirty men she doesn’t know and start talking to them as though she’s known them for years.  (okay, that does NOT sound right at all!!!  Is this a genetic thing?  HA!  Just kidding you guys!  Now stop it!)  As I keep my eye on her, I see her handing out the Popsicles to them all and they are all smiling and nodding, as she is engaging with them in her own uniquely innocent way.

She comes walking back and I immediately ask her what she earned and how the interaction went.  (I confess, I was a little uncomfortable with her being over there alone…..but I really wanted this to be all hers)

She says,  “Well I didn’t sell the Popsicles, I gave them to those guys.  They were hot and tired and looked like they really needed to be refreshed.”

I tell her how nice that was of her and asked again if they said anything to her.  (Gotta do the “mom check”….I mean, she was just over all alone with about a dozen strange dirty men and all, right?)

“They seemed to like the Popsicles, but they don’t speak any English.”

We walked the long way back to the house, feeling worn and withered and a little disappointed that the only sale they got was from their aunt.  Then turning the corner, we see three girls running in from the driveway to the house as we approached.  With my daughter disheartened that they would run away from our Popsicle stand, we continued ahead.  I looked back and realized they were coming back out of the house again, but this time with MONEY!!!  It turns out they were running in the house to get change for Popsicles!  I hollered up to my daughter and son to come back to the house telling them they actually had a sale!  A REAL SALE!!!!!

After a rocky exchange of sorts with my son whining for the fair split of the profit and my daughter forgetting to give two out of three of the girls a Popsicle….the sale was made! (amazing)

So it was quite the adventure of the traveling Popsicle stand.  One family friendly sale.  One real sale.  And a lot of donations given.  The makings of a great business!  I believe we will save the rest of the Popsicles for next summer and that wedge of old ice too….

All in all, an exciting and noteworthy “Mom Story” to tell!