I mentioned on Facebook that I have set a goal to start supporting more bloggers who have published books and I intend to share more of the many talented writers and friends through my blog and on all my social media outlets. I couldn’t think of a better way to use my time and invest my money. There are countless bloggers out there that have published their work, and they have launched that gift out into the world. I will be featuring many of them here on my blog, and I hope you too can invest and be inspired by their hard work and tireless efforts in making their dream come true! 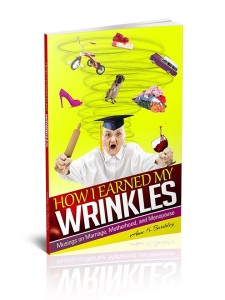 Today I get to share an adorable blogger who is the author of this new hilarious book, “How I Earned My Wrinkles: Musings on Marriage, Motherhood, and Menopause.” Read on to take in her wit and her hilarious story, then go buy her book, and check out the amazing reviews too! Anne’s humor will not fail or disappoint!  If you want a great read full of countless laughable moments, she’s your girl!

About six months ago, Scott became a Eucharistic minister. He serves Communion every Sunday at church. He feels very blessed and honored to do this. He looks like a big altar boy as he floats down the aisle in his white robe.

When he passes me, he gives me a smile and a wink. I wink back and give him a smooch face. I love this man!

One Sunday after church, we went to the beach for some sun. Our daughter, Jamie, was visiting after just finishing grad school. As we stood in line to order lunch at the beach café, a young woman wearing a New Jersey T-shirt got in line behind us.

Scott mentioned that he spent every summer at the Jersey shore as a kid, and she gave him all the latest news.

After we sat in our chairs on the beach, who should arrive but Miss Jersey.

“What kind of help?” Scott asked.

Off he went six beach towels over. Within a few minutes, we heard laughter coming from that area, so I decided to investigate.

As I approached, I noticed they had set up an impromptu beauty pageant. It looked like the swimsuit competition for Miss America.

There were four judges in beach chairs. Sand castles bordered the runway, which passed through the judging area. Scott was judge number two.

Each judge had large cards numbered in black—eight through ten. They also had “Fake” and “Real” signs to complete their scorecards.

The judges attracted the attention of women walking on the beach. There were many participants, all in good fun. The neighboring sunbathers were clapping, which inspired the contestants.

The women were now dancing. Contestant number one was showing off her gymnastic ability. Contestant number two posed like a model in a photo shoot with the wind blowing through her hair. She pouted her lips in hopes that the honorable judges would raise her score. Angelina Jolie would have been proud.I headed back to my chair.

“So what’s happening over there?” Jamie asked. “Do I want to know?”

“Your father is a judge, and he has cards with eight, nine, and ten on them. He also has signs saying Real and Fake.”

She leaned back in her chair and peeked over her sunglasses. “Are you serious? Tell me you’re kidding!”

Just then, a middle-aged woman wandered over and asked, “What did they want your husband to do?”

I explained and she laughed. We introduced ourselves. Marilyn was on vacation from New York. I leaned in a little closer and asked her to do me a favor. “Can you just go over there and ask him if he gave you Communion this morning?” She grinned and said, “Anne, I like your style!”

Jamie and I watched Marilyn saunter over to the catwalk. She was swaying her hips and flipping her hair. She had the judges’ attention! They gave her two eights, two nines, and a Real sign. She got closer to Scott, tapped him on the shoulder, and asked, “Aren’t you a Eucharist minister? I think you gave me Communion this morning. Should you be doing this?”

He sat straight up and did his best Linda Blair impersonation from the movie The Exorcist. His head spun to the far left, then right. He was scanning the area for fellow Catholics who received Communion that morning.Just then, Jersey girl said, “Scott, you are so busted!”

He scampered back to our beach chairs, wearing sunglasses and a floppy army hat. He was incognito! “Oh, my God! You are not going to believe this,” he told us. “Someone recognized me from church. I gave her Communion this morning! Oh, this is so not good.” He sank back into his chair.

“Dad, she recognized you?” Jamie asked,“Are you sure you gave her Communion?”

His voice was shaky as he responded, “Yes, I’m sure! Can you believe it?”

We both responded at the same time. “No! What are the chances of that happening?”

To make things even better, Marilyn stopped by to chat. Scott asked her, “How did you recognize me?” He was still baffled that this could happen. She deserved an Academy Award, when she replied, “Oh, it was easy. I recognized your mustache and those broad shoulders.”

He forgot that he was in potential hot water and started puffing out his chest. He moved his shoulders to show her what he’s got. “By the way, you looked like a football player when you came down the aisle in that robe.”
At this point, I don’t think he knew if he should say “thank you” or run home.
About that time, our friend Tracey arrived at the beach. I immediately mouthed the words, “Just go along with this.” She grinned back at me. Scott immediately confessed to her. She looked appropriately shocked. “Scott, what were you thinking? Eucharistic ministers can’t behave like that.”

Jamie was now smirking in her towel. I just sat with a bewildered look on my face. “Jamie, pass the suntan lotion, please. I don’t want to be as red as your father when he burns in hell for his actions.” The three of us cracked up. Scott saw no humor in this conversation whatsoever.

The next morning, Scott moaned that he had a terrible dream. “The church called me in and fired me.” I immediately put a pillow over my head and pretended to have a coughing fit.

He was so upset with his behavior that he started telling everyone what he did. He told people at work. He called family and friends. He even called my eighty-five-year-old Catholic Aunt Helen to ask for ideas for penance. He also mentioned to her that he gave everyone a nine score and they all got Real signs.

My aunt said, “Well, Scott, I’m not sure that’s going to be enough to get you into Heaven.”

The next Sunday, Scott sat in his robe, reading his prayer book before Mass started. He opened to a page that told about the behavior of a Eucharistic minister and read, “You must always carry yourself in a responsible manner and never act in a way that would embarrass the church.” He snapped the book shut and closed his eyes. He was convinced God was sending him a message.
The next day, as he was preparing to leave town on business, he said, “I hope that woman isn’t on the plane.”

I realized that this was torturing him. It wasn’t funny anymore. I had to tell him. “You didn’t give her Communion,” I confessed.

He stared at me and said, “Yes I did! She recognized me.”

I felt very guilty. “I punked you,” I confessed. “I asked her to tell you that you had given her Communion. I have no idea who that woman was. She was just a random stranger on the beach, playing along. She won’t be on the plane.”

“No, Marilyn recognized me. Stop trying to make me feel better. I’m going to call the church and ask if there have been any reports about my behavior so I can tell my side of the story.”

Now I was beginning to sweat. “You can’t call the church and report this. They’ll fire you! Seriously, I punked you.”

He stepped back and laughed. “Are you serious? You punked me? Jamie knew? Tracey knew? You really got me!” he laughed, looking relieved. “That was great!” He laughed all the way to the car, saying, “I’ve been punked!”

I’m a little nervous now. You know what they say about paybacks. 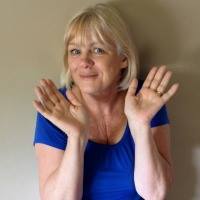 Anne Bardsley is a humor writer, blogger, and author of “How I Earned My Wrinkles: Musings on Marriage, Motherhood, and Menopause.” Over the years, her work has appeared in several publications. More would be available if she was not so busy pondering ways to firm her thighs. This uses a huge amount of her already limited brain cells. She barely survived raising five kids. They were all worth the labor pains in the long run and have given her wonderful grandchildren. Anne currently lives in St. Petersburg, Florida with her husband of thirty-five years and two spoiled cockapoos.