One year, Halloween unfolded a bit differently than expected and we learned how to practice the golden rule- do onto others as you would have them do onto to you. My son had picked out an awesome “Flash” costume to wear in his Kindergarten parade at school… because of course my kid is as fast as they come! I volunteered for the fun celebration, and many of the kids had the cutest costumes and were crazy excited for the party!

This child was the one kid my son didn’t like very much at all. My son had complained several times that this boy had called him all sorts of names and was “mean.” As the kids and I often do, our discussion of people who are mean turns into how they must be hurting. I try to guide them in understanding the background behind the mean behavior. It never excuses the mean, it just explains it. We talk about loving others as we would want to be loved, despite how they treat us. And that’s a doozer of a lesson. Am I right? But perhaps, the most important one of them all.

So back in the classroom, all the kids were scurrying around taking turns to go into the bathroom and put their costumes on. The excitement was brewing and the energy was high…except for this one child. He was mad. This little boy, dressed in clothes that needed to be washed and layered crust around his nose- didn’t have a costume. As we walked the costume parade out around the school building for all the endearing parents to see, I caught up with this boy, and asked why he didn’t have a costume. He sighed deeply and then said, “I wanted one SO BADLY but my mama wouldn’t listen and she never got me one.”

I hugged the poor little boy and said how sorry I was. At the end of the party, I approached my son to share this news with him. I offered an idea, one that he surely would not easily accept. I challenged my sweet boy to give beyond measure. I asked him to give his beloved costume to the boy who was mean to him. He resisted as any five-year-old would, but then he grew warmer, as he processed the reality of this situation. He understood that this poor kid wanted so badly to have a costume- and didn’t. This sad boy who was angry at the world and mean to my son, had no costume like all the other kids in the class. Compassion stirred my son into action. He complied. He went to the bathroom to take his costume off to then give it away.

My son had several costumes to choose from in his bin of old costumes and some clearance play clothes at home. We were certainly not without. I explained that to my son, and as difficult as it was for him to appreciate this fact, he knew- at 5 years old- the value of generosity and the tragic reality of abundance versus scarcity. He knew that although this boy wasn’t nice, he still deserved to have a costume like all the other kids.

As all the kids were frantically packing up their backpacks with a sugar-induced frenzy at the end of the fun-filled day, I approached the teacher and asked permission to slip my son’s costume into the boy’s backpack. I wrote a note to go in there with it that attempted to soften the pride with which this might be received. My son and I approached the boy and told him he now had a costume for the night.

This angry little boy lit up with a big grin and said “Wow!” He took his backpack and walked to the bus line still smiling.  And as he stood waiting, I continued to look at him and smile. He kept glancing back at me with confused wonder.

And from that moment on, this little angry boy became this innocent child in need. A boy who was without. And when we learn how people are hurting, that changes how we perceive them to be. My son understood this truth and he learned that treating others how you would want to be treated- feels good and right and good again.

We decided to take this on as a tradition every year at our school. The next year, I sent my daughter off to school with TWO costumes. One for any kid without a costume, and my daughter would wear the other. In the car we talked about what a great idea this is and how we should do it every year. I reminded my son of last year’s generous act and how that was such a great gift to this boy.  I brought more costumes in each year- to both of my kids’ classroom Halloween parties. There I would find kids who had forgotten theirs or didn’t have one to wear. Each year, I found eyes sunken down in despair and eyes light up when I revealed a bag of costumes brought for them to wear.  In that moment, when all the other kids are excited and showing off their costumes, when all the kids are rushed with excitement about this special occasion, there were always a few who sunk, sullen, in need.

It may have been just one day, one costume that one kid got to wear…

But it made a difference on that day.

Because we brought extra costumes to share, we were able to help children who were without- and in that moment and on that day, it made all the difference in the world.

“Do onto others as you would have them do onto you.”

Our tradition lived on until both my kids graduated from grade school.

This is the first year, I won’t be bringing costumes to school for a Halloween party. My youngest is now in middle school. Sigh…

Perhaps YOU can carry on our tradition and bring a bag of extra costumes to YOUR school? Or send along one extra costume with your child. 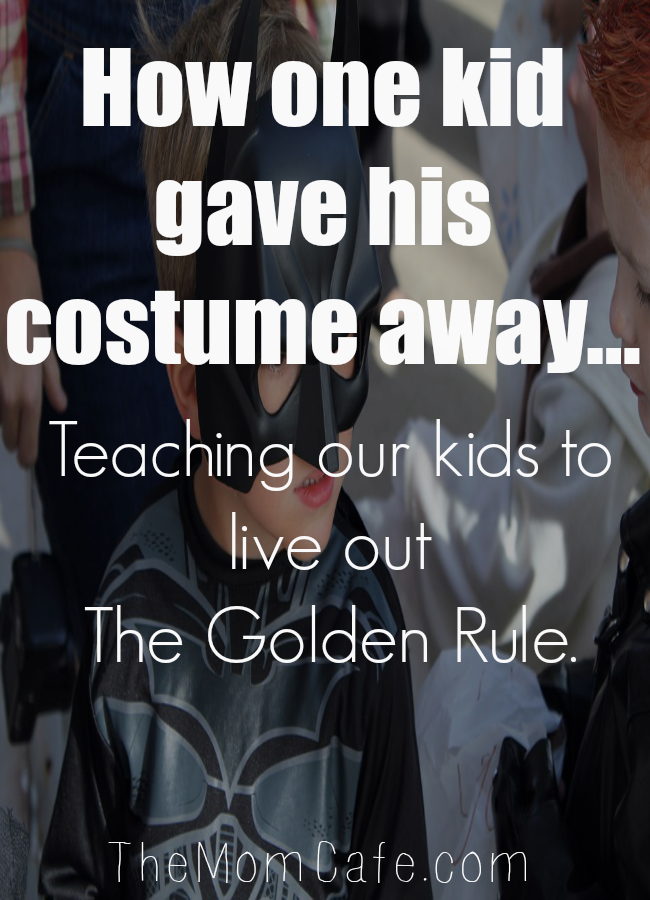 “Do unto others whatever you would like them to do to you. This is the essence of all that is taught in the law and the prophets.” Mathew 7:12