“Oh Cassidy, do you remember this song?”

“I Can Only Imagine” started playing as I switched around the cd looking for the song Cade begged to listen to once again… I immediately turned it up and gasped with that ever-reminiscent stirring gust of air that somehow blows the dust of those years into an emotional tailspin.

“You don’t REMEMBER? Really? Oh honey! When you were two and three years old… this was our song!”

My heart immediately crumbled into a thousand tiny pieces as I realized all those countless nights and endless days we spent together singing this song. I couldn’t believe she didn’t remember. How could she not have these critical years singed in her memory? I was absolutely astounded.


During those years, my little toddler knew every single word to this song. Her voice was angelic. It was the only comfort to cling to during that horrific time of her life.

Just weeks after Cade was born, we rushed Cassidy to the hospital with a fever of 105.9. She had been so sick for days, and for the first time I reached out to my church group for prayers. I was so scared. Her breathing was labored and her asthma flare had been relentless. I hadn’t slept for days… up every night with her and nursing my newborn. These were the hardest days of my life. I picked up her limp body and buckled her in, got baby Cade and immediately called the doctor as Derek drove us to Children’s Hospital.

This wasn’t the first time we had rushed to the hospital. And it surely wouldn’t be the last.

But on that fateful night, I spent hours holding my baby and the mask that dispenses the breathing treatments while we sang over and over again…

“I Can Only Imagine”.

It was the only thing that distracted her enough to hold still. Each time she cried or tugged at it, I would ask her to sing with me- loudly over the vapors and she would whimper and oblige. After hours of needles and treatments and shots and tests, the song was all I had to hold on to- to give her comfort. And as I held her and rocked her… we sang.

Over and over again.

Five hours later, I was arguing with three doctors begging to take her home. Her oxygen was too low. She had to stay and be admitted. I was nursing Cade, and he wasn’t allowed in the respiratory isolation unit over night. This meant I would be leaving Cassidy in the hospital with Derek. For the first time in our life- I wouldn’t be with my baby to ease and comfort her through the night. She would be in a caged crib hooked up to monitors in this foreign scary new world… without me.

At my baby’s sickest and most traumatic moment of her life, I had to leave her…

I sobbed all the way home, uncontrollably… along with Cade, who at this point was screaming. I don’t believe I have felt a more desperate ache in all my life since.

And then one night at the hospital, turned into two.

For almost three years, I had been holding my baby girl through the endless brutal nights of sickness. This was the hardest ‘let go’ I have ever had to face.

So many nights, I would wrap Cass in blankets and carry her outside in the cool midnight air, praying it would sooth her croup, or settle her choking cough. I was terrified most of the time. I was desperate. Hearing your child in agony for hours and hours and days and days… coughing to the point of vomiting over and over and over and over … again. This was our plight.

Days turned into weeks…
Weeks blurred into years…
Crying…crying… begging…pleading…
Clumps of hair pulled out of my baby’s precious head…by her little fingers twisting and fraying those frazzled threads. The only way she could cope with the trauma.
Capillaries burst in her face…
Steroids engorging her precious little body…
And she would always beg me to sing. 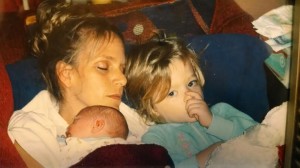 Where was God in all of this? I will tell you exactly where He was, in my Devotional Diary this Sunday.