Today I am honored and excited to introduce to you my new favorite Mommy Blogger!  Mary is the mom of two boys, and I believe she was cut out for it!  She is hilarious and brilliant in her own unique voice over at OutmannedMommy.com, and I am thrilled to have her here to share her story.  Ah, we all may identify with much of it!  When you are finished, you simply must go check out her site and get to know her.  You will be entertained for hours on end, with her stories and her authentically humorous take on life.

I’m a sucker for funny and authentic. 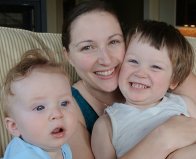 Take it away Mary!!!

My life has been invaded by boys. Their testosterone, dirty socks, and toys with wheels have permeated even the most private, girly recesses of my home. I once was a girl. I used to wake up in the morning, shower, shave my legs, choose the perfect outfit from among my organized but crowded closet, did my hair, put on makeup, and left the house on time…wearing heels. I was the real, fluffy, frilly, deal: a woman.


Then my boys arrived, and with them came cars, trucks, trains, bugs, lizards, four day old socks and dirty underwear, fart jokes and belching contests. Suddenly, they outnumbered me. Even the dogs were boys. I was outmanned in every sense of the word. My dreams of my little ponies, tea parties, and dresses were put on indefinite hold.


As much as I’ve resisted, even my daily routine has been overrun by their manliness.


Every morning, I wake up to the three year old launching himself into my bed making train noises at the top of his lungs. It’s better than any alarm clock and he definitely doesn’t have snooze button.


If I’m lucky I get to use the bathroom before being dragged downstairs to play trains or dinosaurs or both. I look longingly at the shower on my way by, trying to remember how long it’s been since I’d bathed without the kids. I notice a flash of red behind the frosted glass doors. I opening it to find the Lightning McQueen toy we’d lost weeks ago circling the drain. Guess it’s been a long time, then.


Down stairs I feed the bottomless pits that are my boys. The three year old eats four scrambled eggs while I shovel yogurt into the baby’s mouth. I fear for my pocket book when they are teenagers. The baby belches loudly to signal that he’s had enough. Both kids laugh. I roll my eyes.


Five minutes later the three year old asks for grapes. The baby agrees, having made some room after a couple more belches and a fart. On my way to the fridge I step on the world’s sharpest lego. It must be from the medieval torture play set. I toss it angrily onto the counter along with the the train with the claw on top and the stegosaurus I stepped on yesterday.


After breakfast I manage to escape for exactly 2 1/2 minutes to get dressed while the boys are playing with the train table. Are these pants clean or dirty? Oh, who cares? I put on the closest jeans and T-shirt I can find and grab a bra for later. Undergarments are luxuries in my home that are reserved for those special days when we actually manage to leave the house. I once had a boy I was dating break up with me because my underwear never matched my bra. Man, would he love me now!


By the time I get back downstairs the three year old has the baby in a pretty impressive head lock. The baby doesn’t seem to care and is continuing to run his train up and down the track. I thump myself down on the carpet to referee the rest of the game.


Around lunch time the three year old disappears into the bathroom for about 45 minutes to “poop”, which actually means he sits cross legged on the toilet like it’s a recliner and watches videos on his iPad. I would insist he puts the videos away, except this is the only time of day I get to look in the mirror. While the baby rifles through the drawers in the bathroom, pulling tampons out and sticking them in the bathtub, sink, and his mouth, I assess the rats’ nest that used to be my hair. For a brief moment I consider plugging in the straightening iron and frying it to within an inch of it’s life, but then the three year old starts whining about privacy. He admittedly insists that we vacate the room so he can complete his transaction. I swallow the desire to point out that it’s been years since I used the toilet without an audience, and dig around in the drawer for a hair tie. Guess I’ll be rocking a ponytail again today.


For lunch: MORE FOOD, followed by some scraps of Play Doh the baby finds on the floor and exactly three kibbles of dog food before I notice.


Eventually, we make it outside to play in the yard where the boys find the only spot in the yard without grass and proceed to throw dirt in the air and then act surprised when it lands on their head. I think about putting a stop to it, but figure what’s a little dirt on their already Play Doh, yogurt, strawberry and unidentified substance stained clothes. I sit down on the deck to check Facebook on my phone and notice that somehow, I have dirty hand prints up and down the legs of my jeans. They’re like little dirt-ventriloquists. They have learned to throw their mess.


By the end of the day we are all three filthy. I promise myself I’ll do some laundry tonight so I will have clean clothes to wear tomorrow. I toss my jeans onto the growing pile at the bottom of my once neat closet. There are little boy underpants everywhere. I sometimes find them in bookshelves and on top of lampshades. I try not to think too hard about how they get there.


Once the boys are in bed, I stare long and hard at the pile of dirty clothes. I know I should do laundry, take a shower, shave my legs, and dry my hair, so I can wake up and look like a human being tomorrow instead of the frumpy mess I was today. I know I should do all those things, but instead I decide to take a long bath and read a book. If I shake the dirt out of my jeans they’ll be fine for another day.


My once neat and polished life has become an old pair of jeans that I shake out every morning and sniff just to make sure they’re not too dirty. Someday I hope to revive the girl inside this mom, but in the meantime it’s all bike rides and mud pies. And you know what? I’m ok with that.


Plus, it gives me something to write about…

Mary Widdicks is a 31 year old mother of two boys. Her husband calls her Honey, the three year old calls her Mommy, and the baby calls her Milk. Once a cognitive psychologist, she now spends her time trying to outsmart her boys. She is also the writer of the humorous parenting blog Outmanned, because sometimes a girl needs more than fart jokes and belching contests. Her work has been featured on parenting sites such as Mamapedia, Mamalode, and Scary Mommy.