While watching my six-year-old son play flag football last Saturday, something amazing happened. First of all, it’s important to the story that you know we played him “up” to the big league of 2nd and 3rd graders because he is quite the little athlete (to his father’s credit), and he is doing great! He is fast. He is catching balls a field’s length away. He is running in and out and around and down the field like a bolt of lightning that makes me go… “WOOOOOAAAAAAHHHHH!” Yeah. It’s been fun. 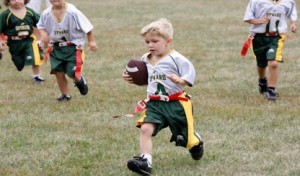 So as the game was unfolding into a heated challenge and the field was turning into a miniature battleground of little people facing off with a frenzied lust for victory… this HUGE 3rd grader got the ball and started running down the field. He was a machine, a powerhouse. No one could get near him.

I was amazed at this kid’s size and his speed. I questioned if he was in 3rd grade or 6th. I mean he has got to be about 6 feet tall weighing in at 237 pounds (this may be a slight exaggeration) and he is running full force down the field. Now I see my 40-pound tot flying down the field toward him. As my kid closes in, the giant stumbles and ends up pummeling my baby head-on with a nice steamroll slam to the ground. I do the mama thing: I hold my breath. I stare wide-eyed and terrified. I can’t see my little man because the giant is too big, covering his little body while lying on top of him. In an instant, I panic. And the mama bear freak within me sparks, bolts, fires, and I want to scream, “Someone PLEASE HELP my baby! He can be DEAD under there!”

Yet with my boy still buried under the giant… Something miraculous appeared.

One skinny little arm shot out from underneath the rubble and straight toward the sky…holding the flag!

During the impact and collision of this deadly pile-up, my son had gone for and grabbed the flag. As he was being pummeled to the GROUND, my kid grabbed the flippin’ flag!!!

I believe the angels sang and the heavens opened that very instant. Or at least they should have… Singing “Triumph! Oh, sweet victory!”

Because also at that very moment, peering at this skinny arm raised high, holding the flag- I saw the big picture. Although it was ALL about my son that day, (because of course) it transformed into an aha moment for me, and possibly for you too.

Who here feels they are under a big pile of rubble? Who here feels small and weak? Who here sees the giant running right at you and my gosh, the collision is coming? Who here tackles that giant, risking the impact of a heavyweight crashing down and burying you? Who here lands UNDER the weight of it all, the pressure, the giants in your life? Who here goes forward with confidence in knowing you can try to capture that flag even though the chances are pretty slim? Who here plays the game hard and gives it your all, with what little you’ve got, full well knowing there might be crushing tackles ahead? Who is afraid of that giant in your life? Who can shout ‘SWEET VICTORY, I DID IT!” and raise your weak little arm holding that FLAG?

But I guess the challenge is to grab the flag and raise it high…even under the weight of it all.

Who can claim their flag?

Or are you still under the rubble, weak and unable to move? Been there.

My son had in his little 6-year-old mind, that he was going after that flag even if it meant he was going to get grounded by 237 pounds of flesh, running 45 miles per hour at him. Wow.

I want some of that fierce, bold, crazy-strong stuff that blazes through the giant and raises the flag.

Oh, come to me, Sweet Victory!

Girls, if you are facing your giants or you have already landed under the rubble of their weight-

There will surely come a time when you will raise it in the air and claim, “SWEET VICTORY, I DID IT!”