Oh sweet friends, if you haven’t met my next guest, you simply MUST get to know her! I have been following Susannah for a long time over at Whoa! Susannah, and our friendship has been one of the greatest blessings I have found in this blog-world!!   I am in awe of her hilarious wit and brilliant gift as a writer.  She always makes me laugh OUT loud with her takes on life, and at the same time- she woos my heart with her deep abiding faith and beautiful heart within.  I am incredibly honored to call her friend, and can’t wait to see her work published and on the bestseller list!  She is a gift.  Her testimony today was a difficult one for her to write.  Please join me in living through her agony and triumph in the battle of spiritual warfare.  It’s real, people.  It’s real.  And I think this story is one that reminds us of that very truth.  May her profound words enlighten you to cling to God through our darkest battles.  And may her passionate faith bring new light and hope, if you may be captive of his lies.

It was December 2nd, 2009 and I was lying on a table in my obstetrician’s office, my large hard belly covered in cold gel. My husband stood beside me, and we both eagerly watched the black and white blob on the monitor as the nurse performed the ultrasound.

“Do you want to know what you’re having?” she smiled.

As I waited for the nurse to confirm my intuition, I envisioned picking up my beautiful, blonde-haired, blue-eyed three-year-old daughter from Mother’s Day Out at the Methodist Church later that afternoon. I imagined the toothy smile that would come across her face when I told her that her best lifelong friend- a baby sister- would be here soon.

When I was pregnant with my daughter three years before, I knew all along that she was a girl. I just knew. And I just knew that my second child would be a girl, too. I knew that God was going to bless me with many daughters, because that was the desire of my heart. I knew that I was not meant to be a mother to sons.

The nurse began typing on the keyboard and three little words appeared on the screen hanging over my large stomach.

I heard my husband exhale joyfully and I saw the delight in his eyes. He would have a boy to catch the football, to dress in camouflage and join him in the deer stand. I grinned, but my heart sank. I’ve never admitted that to anyone before, but my heart sank when I learned that I was having a son.

As we left the doctor’s office that day, I was engulfed in emotion. I managed to smile and put on an Oscar-winning performance that I was excited to bear a boy, but I really felt confused, devastated and deceived by my intuition, perhaps deceived by God. I did not want a boy.

As the weeks went by, I fell into a dark depression. Horrible thoughts began to flood my mind.

“You won’t love this child.”

I heard it daily, hourly, minutely. I heard it as I folded laundry, as I washed dishes, as I picked out his nursery bedding and bought his first teddy bear.

As if those thoughts weren’t horrific enough, I began doubting my faith.

“God knew the desire of your heart was to have another daughter but He gave you a son. He failed you.”

I felt blindsided by the thoughts that raced through my troubled mind. I cried out to God for help, for restoration, and for the first time in my life, I could not feel Him. I could not hear His wisdom. I felt as if I was talking to thin air- that my prayers were not being heard. I’ve always felt the Lord’s presence in some way, but as I cried out to Him to lift me from depression, I felt nothing. I felt alone. I felt empty.

“He’s left you. He’s abandoned you. He doesn’t care about you.”

I locked myself in the bathroom late one night when my husband and daughter were fast asleep, and I slid my heavy, pregnant body to the floor. I held my head in my hands and I sobbed an ugly, snotty cry. I begged the Lord to rescue me from the battle raging in my mind.

“You’ve been a fool all of these years to believe in your God. He doesn’t even exist.”

I didn’t want to believe it, but from that night forward, the thought was relentless. I heard it in the grocery store, in the car, even in my dreams.

I dove into my Bible. I read passages that I’d read a hundred times, but I felt nothing. The Word no longer made sense to me. I started to believe that God wasn’t real- and if He was real, that He’d abandoned me. I have never felt so hollow or alone.

Although I was being barraged with putrid thoughts, I refused to give up on what I’d believed since I was a child- that Jesus was the Son of God, and that He’d died on the cross for my sins- that He’d died to rescue me from the very torture that I was now enduring. I refused to forget the other times in my life when I’d felt His presence. Although I thought it constantly, I refused to believe that my God and my Bible was fiction.

I knew my thoughts weren’t true, noble, pure or lovely (Philippians 4:8), and I knew that they weren’t from God. I also knew that they weren’t even my own thoughts. They were lies straight from the enemy. The devil was determined to attack me to the fullest extent. He was determined to drive me stark-raving mad. As soon as I opened my eyes each morning, he was waiting for me- waiting to devour me with lies and whisper failure and guilt into my ear.

The second that an evil thought entered my mind, I began speaking 2 Corinthians 10:5 aloud.

“Cast down imaginations and every high thing that exalteth itself against the knowledge of God, and bring into captivity every thought to the obedience of Christ.”

Each day, I spoke the Word aloud, and I finally had brief moments of peace. Although I still couldn’t feel the Lord’s presence, I had learned not to rely on my own feelings or understanding, but to rely solely on the Word of God.

When the contractions began on April 1st, 2010, my mind came under substantial attack again.

I recognized these thoughts as lies, and I prayed for the Lord to remove the contemplations, but they remained. They were just as stubborn as they had been when my mind was first attacked four months earlier.

I was actually relieved when my son wasn’t born that day. I was relieved that I didn’t have to see him yet- and have the devil’s lies and my worst fears become truth.

But he decided to come on April 2nd. I tried to silence the deceptions that consumed me as I moaned in agony and pushed him into the world.

“I bind you away, Satan, in the name of Jesus,” I repeated to myself as my husband cut the umbilical cord and the doctor placed my son on my chest.

When I looked at my child, I immediately felt the presence of the Lord. For the first time in so many months, I could feel my God, my Savior, my Comforter- I could feel Him right there with me. He was just as present as my husband or the doctor.

I looked at my mother, who had some idea of what I’d been through during the pregnancy and had prayed with me countless times to be freed from Satan’s attack- and I sobbed. Without saying a word, she knew that I was no longer consumed by the devil’s lies. Instead, I was consumed with love for my baby, and love for my God.

From the moment that I laid eyes upon him, I couldn’t have loved him more. And the Lord spoke a revelation to me- right there in the hospital room- as I stroked my son’s head full of dark brown hair and his round, peach cheeks.

“This child will do great things for Me. That’s why you’ve suffered so. That’s why the devil has attacked you. Your son is a threat to the enemy.”

And I absolutely believe that I endured darkness, despair, spiritual warfare and an attack on my mind for four months because the devil knew that my boy will do great things for God someday. He knew that if he could convince me of his lies- that God doesn’t exist- that I would not raise my son on the Word of God.

And I absolutely believe that the Lord allowed me to endure those things- that He stayed quiet through my trials- because He knew that this would serve as my testimony and that I would dive into my Bible and mature spiritually. The whole purpose of trials and tribulations is to promote growth. Remember Job?

James 5: 10-11 says, “Brothers and sisters, as an example of patience in the face of suffering, take the prophets who spoke in the name of the Lord. As you know, we count as blessed those who have persevered. You have heard of Job’s perseverance and have seen what the Lord finally brought about. The Lord is full of compassion and mercy.”

And my testimony is this- Satan is real. He seeks to kill, steal and destroy. (John 10:10) He seeks to wreck us spiritually, mentally and physically. He seeks to bombard our minds with lies- with depression, with failure, with negativity.

We must stand strong in the Lord. We must hold fast to our faith and the truth spoken in the Word. We must put on the whole armor of God. We must refuse to believe our feelings or the lies of the enemy. We must remember that the Lord will deliver us as He promises in Isaiah 41:10. “Fear not, for I am with you. Be not dismayed, for I am your God. I will strengthen you, I will help you, I will uphold you with my righteous right hand.”

On December 2nd, 2009, I would have never believed that I could love a son as much as I love mine. I couldn’t love that child more. Along with my daughter, he is the absolute greatest gift that God has ever given me. I can’t believe the absurd lies that the devil spoke to me about him. I can’t believe that I fell for them for so many months. Praise be to God for lifting me from the darkest period I’ve ever known.

Weeping may endure for a night, but joy comes in the morning.

Go, my sweet son, and do great things for The Lord. 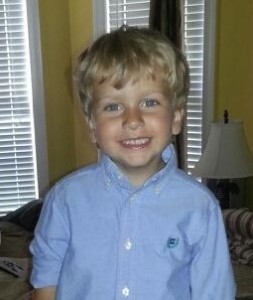 *If you are struggling with lies from the enemy, I recommend reading Joyce Meyer’s Battlefield of the Mind. “The battlefield or realm in which our spiritual warfare takes place is in the mind of every believer in Christ. We wrestle, or strive and struggle in our minds against world systems, the flesh or the carnal nature, and the devil. The mind encompasses our thoughts (imagination, reasoning, and intellect), as well as our emotions and will. We will encounter a very real spiritual struggle in our thoughts, emotions and will because the adversary knows that these areas are directly related to the power of our faith, and means to receiving the promises of God. The adversary’s goal is to weaken the faith of every Christian.”