The birth of Christ is the most well-known and celebrated story, through the prophetic anticipation of our savior to the miraculous entry into the world. The sweet simplicity of the manger and humility with which God delivers His Son brings forth the foundation and stage for the ultimate sacrifice for our sins. There is magic and wonder in angelic hosts opening up skies and a star so bright it guided many across the land to kneel down in praise of the newborn King. The Christ-Child is born and to this day, His Name brings forth a resounding Hallelujah!

This season awakened in me, a new perspective surrounding the Christmas Story. Have you ever taken a deeper look into what this tale really tells? Each character in this drama, may reflect each one of us- through generations and history, the Christmas Story is still living on in the lives of us all.

Could it be, the message stretches beyond Bethlehem?

Did God place these people perfectly in this profound birth for a reason?

There is significance in each person that played a part in the coming of Christ and perhaps we each have our own role in the same story, thousands of years later. Are we those same characters? Do you see the traits of any of these people in you? In someone you know? Maybe God was sharing with us through His Son’s birth, a story much bigger than the illuminated eve of the Christ Child. Could it be, that within the pieces and parts of the plot-

He was showing us what role we would play?

Perhaps each person is placed by God to show us the trails and trials He calls us all through for His Kingdom. Each one picked so carefully as they play a significant role in God’s Plan. 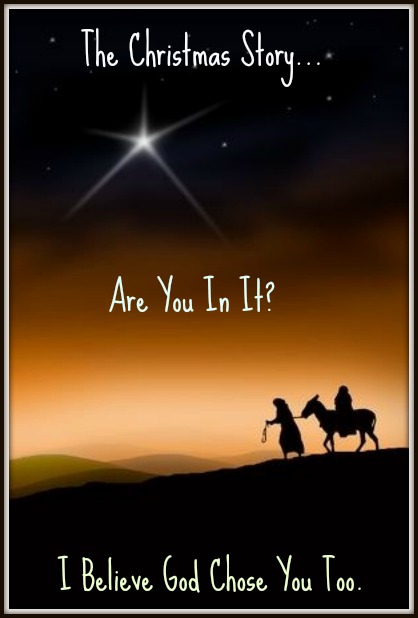 The courage and faith it took for her to allow God to use her in the most miraculous way. The conviction she must have pulled from the depths of her heart to see it through. The path she chose to take in honoring His Call was one of trepidation and fear. God chose her to be the miraculous mother of Christ, playing her holy part in history. She was called and she responded with bold faith… living out her purpose for her God.

She was just a girl, in love. And she was chosen. God chose her to be part of His Plan.

Is our path much like Mary’s?  Are we faced with unbelievable news and are we brave enough to move forward with faith?

A man who is told something unreal and impossible to believe. This man who in the face of the world’s winds of rules and culture and community, took on a message and carried it fully in the name of God. He risked his life and his love, to carry out God’s Divine assignment. He believed Mary. He trusted God’s purpose and stepped into God’s Plan with only faith as his armor and strength. He stood alongside Mary in carrying out the ordinance of delivering God’s only son. He boldly took the message of God, and carried the burden of a woman with child for the sake of eternal hope.

He was just a boy in love with a girl. And God chose Him to be part of His Plan. God called him, and he responded with bold faith, living out his purpose for his God.

Is our road the same as Joseph’s? Are we faced with unthinkable decisions and unfathomable futures?  Do we trust in God’s guidance for our lives?

Just a lowly hard working servant, living out his life in the field. A position that doesn’t bring integrity, and yet it is critical to the culture in tending the sheep. His job is significant, and yet not dignified. He labors all day and night tending to the flock, with little pay and esteem. He does his work quietly, and doesn’t mind the dirt or the grime or being isolated from the mainstream. He carries out his purpose tirelessly without a question or a sigh. He isn’t anyone special, one of many. This is his place in time, and he is committed to the harsh land and life.

He was just a hard working, lowly shepherd. God chose him to be part of His plan.

Why on earth would the angel come to the Shepherds in the field? I would think the announcement of Christ’s birth would be better served elsewhere, wouldn’t you? What is so special about these guys? And the heavenly hosts announced the greatest news on earth to them. The message of the Lord was spoken in illuminating light on these dirty tired men.

Sacrificial. Serving. Humble. Scared. Hardworking. Unnoticed. Chosen. Their life forever changed when God opened up the skies for them.

Do we labor tirelessly and sacrifice ourselves for the sake of our work, whatever that may be?   Do we feel ‘unnoticed’?  Does God choose us?

Ah… Royalty. I can picture the Magi making the trek across the vast desert to see for themselves, the Christ Child. They came from prestige and power. What I can’t imagine is how they were able to understand the significance of this birth.  They didn’t need anything more in their lives. They lived far away in their own land and had their own dignity to deliver to their people. And yet? They stopped their high life of comfort and wealth to travel the harsh terrain to meet the true King. Perhaps they realized that the light of this world didn’t come from their garnished robes or jeweled crowns. They sacrificed their days of freedom and bountiful feasts while they journeyed in search of their true Messiah.

They were men of power and royal riches. God chose them to be a part of His Plan.  They honored His call.

Wealthy. Rulers. Majestic. Powerful. They left their possessions and followed His Star in search of significance and hope.

Are we full of riches and power, perched on our own thrones?  Have we opened our lives to the light of our true King? Perhaps we may sacrifice our riches and worldly roles in search for the gift and hope in Christ.

The Inn Keepers had no room, but they offered what they had. It wasn’t glorious and even acceptable, but in doing so- they allowed Heaven’s Doors to open and pour God’s Grace on the world.

Such A busy hectic time for them, as people crowded the city for the census. The Inn Keepers were inundated and surely stressed from the frantic fury swirling all over town. Who would receive the knock on the door and open it to see Divinity in the midst of the madness?

Just one busy servant. Tired and overwhelmed from the chaos of his job and the unending needs of the travelers. He held the key to all of our hearts, when he was faced with a choice that most would turn down.

Too busy, too full, too tired and overwhelmed to see the highest need. The Inn Keepers rejected the most precious gift of Peace not knowing what they missed. As hectic days can do, they were simply too distracted to care for His Call.

And yet, one heart, tender enough to sacrifice more for the weary. He offered safe solace to struggling strangers, no matter the cost. He granted the Prince of Peace a room in his place, unaware he was hosting Heaven’s Kingdom coming.

Overwhelmed.  Busy.  No time or space for others.  OR  Pressure, Stressed, Divine Discernment, Priorities in place.

Are we too busy to make room for God’s Plan?  Are we opening our homes and our hearts to His Call? Which Inn Keeper are we?

Ah the angel… the heavenly hosts that exude light and hope of Christ’s coming. They create fear and awe because of their Holy voices that proclaim truth and exalt His Name. They bring the message of God’s Plan and open the Heavenly gates to God’s Grace. Angels are often God’s messenger of love, of hope, of help. They bring light to those in darkness, and they serve those in need. The Angels’ brightness and radiating beams bring forth God’s greatest work. The Angels appear to open hearts and fill them with encouragement, guidance, comfort and God’s glorious gift. They are chosen to deliver the message of His Love and His Mercy.

The Angel’s role still shines in all places. Have you been shaken and shifted into His Light by an Angel? Have you been carried and lifted into the arms of God by His Heavenly helpers? I believe their Holiness surrounds us, through the hearts He leads in this land. I have been touched and gifted by many earthly Angels in this life. I wonder if God has used me in this way too.

Do we shine His Light in the darkness?  Do we share His Good News? Do we radiate peace, love and mercy?  Do we serve those in need?

Maybe the picture of the Christmas Story really portrays the story of us. Whether we are robed in royalty and stand in mighty majestic courts, or labor tirelessly in the vast and visceral fields. Whether we are simply a boy or a girl placed in a town trying to abide by its rules…

We are all somewhere in the harsh terrain of the land, beckoning the guiding light and the angels’ voices to lead us to the light of our Savior. And despite the cruel intention of the wicked, who try to thwart God’s Plan, much like Herod-

Humbly lying in the hay awaiting our arrival. Innocent and perfect.  Who will kneel at His side and bow down to receive His Holy undying merciful love?

He is still waiting.

What role will we play on the world’s stage?  I believe we all have a significant part after all.  Follow that road to Bethlehem, though the terrain is tough.

The story isn’t over, yet.