This post is a “three-parter”.  The journey my daughter Cassidy has had with her swimming is as long as it is beautiful.  Stay with me, and see how God worked in her life. 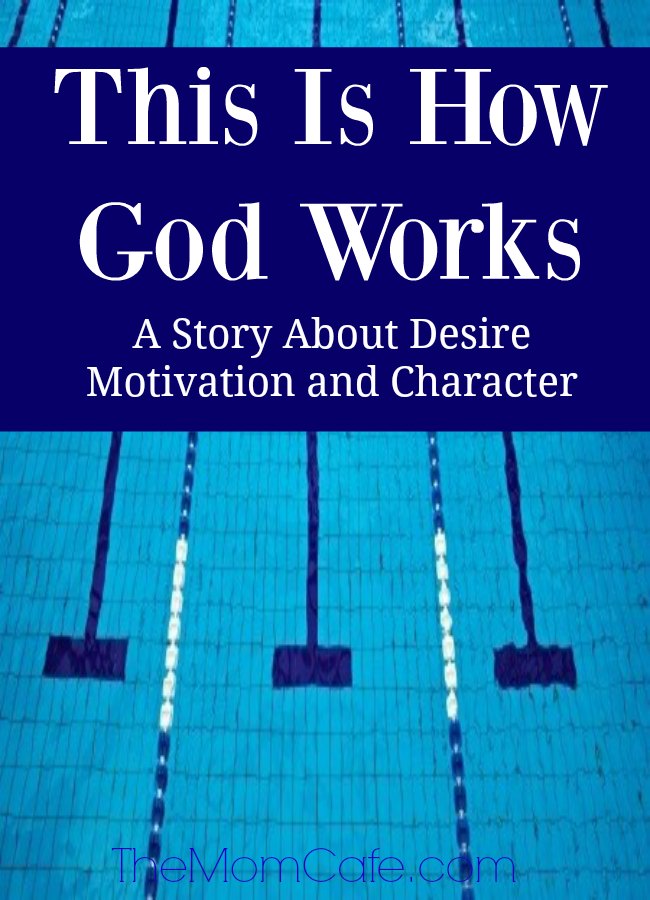 Cassidy has suffered some terrible medical issues and illnesses in her short life.  After countless diagnoses, procedures, medications and surgeries, I am thrilled to share that my girl is finally HEALTHY.  I celebrate this blessing from the deepest parts of my heart every stinkin’ day…

This past summer, she wanted to try swim team at our local pool.  She was terribly nervous because she wasn’t a good swimmer, but after seeing the Olympics two summers ago, she envisioned a dream in her sweet little head…

She was going to be a swimmer.

She practiced hard.  She would try to swim laps as I taught her the strokes.  She was relentless in her efforts. It was quite a summer of watching her try with all her might to go for her goal.  Every day she would swim lap after lap and she was so proud of the swimmer she had slowly become!  I was proud too.

After a long winter into spring of no swimming whatsoever, the swim season had begun and she was terrified, but really wanted to tryout for the swim team at our local pool.  She faced her fears and tried her best with nerves full of adrenalin… and I am SURE it was a “God thing” when she made the team!!  (Other swimmers that swam JUST like her did not.)

It was a rough start.  She coughed and choked and barely made it through her first few weeks of practice.  She cried a lot in despair and defeat, because she wasn’t ready to have that kind of endurance.  (Her asthma was getting the best of her.)

But she refused to give up.

She was up coughing many nights and struggled with choking and needing air through the practices, and yet she managed to keep the desire to continue.  After one night coughing literally ALL night, I resolved to pull her from it all.  I couldn’t bare it anymore.  I was going to let her sleep in and tell her in the morning that we should raise the white flag and I would praise her efforts, but tell her we will try again next year when she is even stronger.

Cassidy woke ME up early that morning, wearing her swimsuit ready to go!  I told her she shouldn’t swim after the night she had, but she relented and refused to give up.  She insisted she go.

I was both impressed but also so worried that she couldn’t handle being at practice with her lungs clearly not in good condition.  I informed the coach about her asthma and her relentless push to be there, and the coach immediately took her case to heart and told me that she too, suffered medical issues and would watch after her.

From that day on, Cassidy never stopped…never gave up…kept swimming and didn’t miss a practice.  She had a mighty intention within herself to be the best she could be.  My ten-year old was growing and changing right before my eyes, into this determined human being with a passion and a mission.

We went to every meet and she swam her hardest and tried with every fiber of her being to do her very best.  She rarely placed higher than fifth/sixth/seventh/eighth… but it surely wasn’t about that.  My girl had drive, and initiative that bubbled up from her spirit and she was part of a team where she felt she ‘belonged’.  She was vibrant and happy despite her struggle, and the coaches praised her efforts along the way.

This, my friends, was her summer to shine.

There were moments of disappointment and humility for her as well.  Often she would be the last swimmer in the race…pulling up the final lap alone.  Her best friend on the team was an incredible athlete and won every race, but always waited for her to finish with open arms.  (Precious)  It was difficult for Cass to accept that she wasn’t a “winner”- ever.  But that didn’t stop her from trying, and embracing this newfound world.   This was all hers.  For the first time in her life, she had this place she could call her own- and I stood on the side lines  watching her soar.

When the final awards ceremony and banquet was scheduled, we had a frank conversation about her receiving any awards.  I knew she certainly didn’t make any record times or would be chosen as the MVP.  She understood and we agreed she would love to cheer on her friends and praise their accomplishments.  She was able to see the reality in this, and able to embrace it, as hard as it was for her to do so.

I took Cade to Jiu Jitsu while Derek took Cass to the awards ceremony. When I returned home, Derek called me and said he thinks I need to be there, because the coach was looking for me.  The coach then called me and asked me a few questions about Cassidy’s health etc, which I found perplexing.  Perhaps she WAS going to get an award?  But what?  Most improved swimmer?  She did improve her times tremendously….

When I got to the pool, all the swimmers were sitting on the bleachers, parents everywhere and the ceremony was taking place with a table full of trophies and awards and all the coaches lined up in the front.  I snuck in and pushed my way to the front and anxiously waited to see what on earth was going to happen!

As the coaches shared different awards, I kept starting my video camera wondering, “Is this the one she will get?”  And each time, I stopped recording, as her name was never mentioned.  The ceremony was nearing the end, and I came to the conclusion that I was mistaken.

As the ceremony was ending, the head coach shared the final award saying it is the highest honor and most valuable award of them all.  I started packing up my camera, then I paused and tuned in to hear her words, as I thought to myself “Surely, this isn’t going to be Cass?”  A surge of energy zapped my heart and I rushed to get the camera back out…

I decided to start filming a few minutes into it, as I began feeling this overwhelming joy start to grow within me… and the most powerful pride I could ever feel for my daughter.  Take a look at what happened.  (Oh how I wish I filmed the beginning!  I had NO IDEA this would be given to HER!!)

I believe it was the greatest moment of my daughter’s life… and mine too.  With all she had been through in her ten years, this was the moment of true triumph.

And with that, comes the greatest lesson in life…

Although skills and smarts and talents reap great success, the most valuable asset one can hold is the heart.