I have a lovely new friend here today to share her story and her novel!  Yvonne has an incredible talent and I am honored to have her share her writing here on my blog.  You can find her at Writing a river and Inquiring parent.  She is a master of words and stories and also?  Being a mother.  Take some time to read her perspective, as she faithfully follows her dream  while working on her MA and writing a novel.  All of this while she she mothers her children.  Amazing.  Take a look, and then please go check out her novel over on amazon!

I was halfway through an MA in Creative Writing when our second daughter flew into life three months early. (She literally flew, because the midwife said, “Push,” so I did. Then she said, “Stop pushing.” But it was too late.)

Our baby survived, and came home. Then just past her date she caught a cold – and both her lungs collapsed.

Witnessing your baby almost die has a profound effect on a mother.  It’s not just that you set aside your own ambitions. It goes beyond that. Your ambitions are your child’s survival.

I did complete that MA, with Distinction, while caring for a premature baby and a sleep-resistant toddler. We got through chickenpox, more bronchiolitis and recurrent ear infections, with all the broken nights that entailed. Sometimes I look back and wonder how on earth I did it, especially since my husband was often away at the time. But it’s what mothers do, isn’t it? We get through.

By the time I’d printed out the last sheet of my dissertation, I had ten chapters of my first novel, Drawings in Sand. It took 7 more years to finish, making it 12 years from idea to completion. During that, we moved 6 times, and I had a miscarriage as well as our two daughters.

I don’t regret that it took so long. The person I was when I finished wasn’t who I’d been at the beginning, and if I’d finished earlier, it would have been a different novel.

For a start, I wasn’t a mother when I wrote the very first pages. Afterwards, I realised the main character could forget about her daughter far too easily. The following extract is one example of how motherhood wove its way into the novel.

Kirsty was a little ghost who followed Stella around, flitting into her mind as she faced a class of rowdy kids, moaned with other teachers in the staffroom, when she was out drinking. She never escaped; Kirsty was always there. She imagined Kirsty was asleep, cosy in her bed, teddy bear in her arms.

I’m from Scotland, home of Scotch whisky and a heavy drinking culture. Men aren’t men unless they can hold their drink. Scottish literature abounds with novels, stories and poems that glorify this culture. Our most famous poet, 18th century Robbie Burns, was almost as well-known for his hedonistic lifestyle as for his poems – several of which wax lyrical to whisky.

Drawings in Sand began as a reaction to literature that glorified this culture. I wanted to show the effects of alcohol abuse – both on the drinker and families. Growing up, I’d seen it destroy families around us. I also wanted to show that it is possible to break free and that even patterns passed down through generations can be broken.

Over the years, I became more and more interested in the way beliefs in general are passed on through generations and in what happens when that changes. I began letting go of old habits and beliefs and learned deeper compassion and understanding. So my main character, who starts off filled with self-loathing, also grows more aware and compassionate throughout the novel.

What I love most is when people leave reviews or privately tell me that reading Drawings in Sand helped them understand themselves or a family member, or that it helped them heal old issues. That’s when I know I’ve done the job I set out to do. 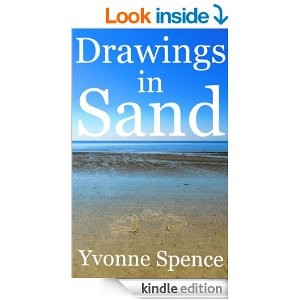 Stella isn’t allowed in the basement. But she’s there, hiding from the quarrels above and whispering secrets to a beautiful mother in a painting. Thirty years later she still doesn’t know who that mother and her baby are. Nor can she remember what she did last night. Woken by her young daughter, Kirsty, to the worst hangover of her life Stella believes she can’t sink much lower. Then she argues with her volatile lover, Macklin, and he goes missing for days. She solicits sympathy from her brother, Sam, but gets none. There’s no respite at work where she lies to her boss about unfinished work and loses control of the classes she teaches. After an explosive phone call with Kirsty’s father, Ross, Stella’s only escape is more booze, even though Kirsty is with Ross and due home any minute, even though Stella knows he disapproves, even though she is convinced he wants custody and getting drunk will provide all the ammunition he needs. The next day, Stella collapses when she should be chairing a meeting. The kindly attention of a colleague pierces Stella’s fear in a way her self-hatred never could, and a journey of self-discovery begins. As she learns to live without booze she re-evaluates her relationships and delves deep into the secrets of her family’s past. Nothing is as she thought it was, and nothing is as it appears to be, not even the mother she thought didn’t love her. Drawings in Sand is a story of transformation and forgiveness: it dives deep into the darker side of the human condition, and rises into redemption and light.

Here is also a link to her short stories:   http://www.amazon.com/dp/B00BRNDZ0Q

Yvonne Spence grew up on the Shetland Isles, and has lived in 3 of Scotland’s major cities as well as London and the South coast of England. Like the main character in her first novel, she has worked as an art teacher, but the staff room tales in Drawings in Sand are entirely fictional! She also had a few other jobs, including: chambermaid, fashion designer and creative writing tutor. Her husband is a pilot, which is not as glamorous as it sounds. They have two daughters, two cats and two tanks of tropical fish.

Several of her short stories have been published in magazines and a few won prizes. Drawings in Sand is her first novel, and is available in Amazon’s Kindle Store. She has also published an e-book of short stories set in the Shetland Isles, Looking For America. She is currently working on another novel and sending Drawings in Sand out to agents and publishers because she’d like to publish in the traditional way for the print version.