I am so deeply honored and overjoyed to share my devotional series with one of my most treasured friends!  Her blog is truly one that inspires me like no other.  She is a unique writer with a gift that touches my heart every time she shares a piece of her world and her perspective on life.  I am always moved by her perfectly placed thoughts and intentional themes.  If you haven’t met Karmen from Chairs from the curb yet, you MUST.  I am thrilled to introduce you to such a creative and talented soul.

I went to see the movie “Moms Night Out” again with a group of friends.

I was able to pick up different things in the movie this time.
There is a part of the movie where two characters are just fascinated with a live web cam of a momma eagle feeding her babies in the nest.
The women didn’t know why they were so captivated by it.
Not to give anything away, but it is later revealed that the momma eagle was simply doing JUST what God created it to do.
And that is a beautiful thing.
I think we can all relate to the fact that we want to know what it is that WE were created to do.
Our beautiful thing.
And we make it far too complicated.
At church a few Sundays ago, during a worship song,
I really took notice of each person on the stage.
The young mom on the piano with the angelic voice.
The men on guitars–one with his eyes closed.
The young guy leading.
They all had this peaceful glow about them while they simply did JUST what God blessed them with.
And it was a beautiful thing.
I just finished reading a book called “In A Heartbeat” about the Tuohy’s–Leigh Anne and Sean who adopted Michael Oher which would inspire the book and movie “The Blind Side”.

Something that struck me was the way Sean described Michael. He said that he was able to “transcend” his past. Other than a basic trust issue, he didn’t walk away scarred from it. Deeply damaged from it. And it was a rough, difficult childhood. 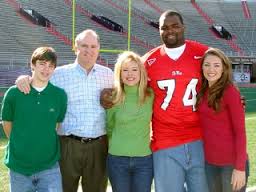 Michael always knew the person he wanted to be and he suspected it was something great. The Tuohy’s said they just helped him do it.
What if we walked through our dark moments,
our hard times
or just frustrated boredom,
with a strong sense of who we are supposed to be?
What if we acted like we were destined for greatness?
Because we are.
1 Peter  5:6 says:
“Humble yourselves, therefore, under God’s mighty hand, that he may lift you up in due time.”
Or as The Message puts it:
“So be content with who you are, and don’t put on airs.
God’s strong hand is on you; he’ll promote you at the right time.”
Michael Oher lived that. 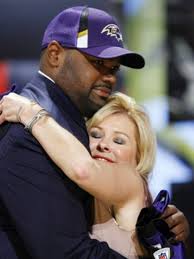 He said that when his name was called during the NFL draft after he was chosen to play for the Baltimore Ravens, it was a dream realized. A dream he always hoped would one day come true.
I’ve been reading and rereading Romans 8.
I don’t know what first led me there.
But it’s become everywhere in the last few weeks.
Quick references in a sermon at church.
A passing mention on the radio.
I have really enjoyed The Message’s translation.
Romans 8: 18-19
“That’s why I don’t think there’s any comparison between the present hard times and the coming good times. The created world itself can hardly wait for what’s coming next. Everything in creation is being more or less held back. God reins it in until both creation and all the creatures are ready and can be released at the same moment in to the glorious times ahead. Meanwhile, the joyful anticipation deepens.”
So that momma eagle in all her beauty and simplicity of knowing that she is being and doing exactly what she was created to do is being HELD BACK?!
There’s more??
I picture the horses in those starter gates at the Kentucky Derby. They are snorting and so fired up to just RUN THE RACE that they are practically electric. But once they are released into a full-on run–God is still yanking back the reigns.
There’s more??
There’s the Tuohy’s in all their open-armed, open-doored love for Michael Oher that literally changed not only his life but theirs and inspired many others to do the same.
And yet, there’s more.
Romans 8 is saying there is SO MUCH MORE where that came from.
Because where it comes from is God.
And one day, when HE senses we are ready,
the eagles,
the horses
and us,
He will let go of the reigns so that we can ALL be released together into glory.
Into MORE.
Into the absolute fulfillment of our beautiful thing.
Karmen is a wife, mom and hopeless collector of things on the curb on trash day. She loves a good story whether you are telling it or her. God is faithful to provide plenty of good stories for her to write about at Chairs From the Curb. 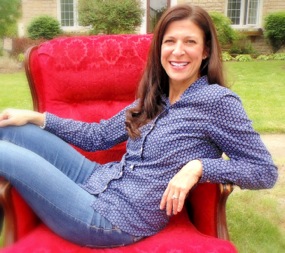