I grabbed my baby and scooped her up into my arms, as she wailed that soul-shattering sound a baby makes when she’s in pain. I couldn’t stand it any longer. I had to stop the therapist from doing her work.

“Don’t you want your child to be able to play on the playground with the other kids when she grows up?

She hurled those words at me with an exhausted scowl.

I’ll never forget that deliberate threat. It pierced a part of my heart that never fully healed. Her response continued to echo through my thoughts for the rest of the grueling session, as I nodded and allowed her to manipulate my baby’s arms and force the exercises needed to strengthen them . I hated every minute of it. But I hated more, the idea of my grown girl, unable to play on the playground like a normal child with the rest of her peers. That imagery haunted me for years to come, and her threatening words replayed over and over again in my head, as we navigated many more tumultuous turns in my child’s development and health.

It’s amazing to me, what we remember and what we don’t. I recall this exact session, where it was and how I felt- and yet I know it must have been after our ongoing sessions downtown at Children’s Hospital- where I witnessed the same ongoing battle with a different therapist who claimed she had never seen a baby scream and cry the way mine did. I vividly recall the countless trips driving into the city, parking in the garage, and pushing my baby in the stroller through the corridors of the hospital and up the elevator to the therapy unit. My stomach in knots every single time. I remember calling my best friend, with defeating updates on how the latest assessment revealed her lacking development. I have defining memories of that therapist referring me to sensory integration assessments and the ongoing fear of my baby not being ‘normal’.

But I can’t recall exactly when this particular home care therapy session happened. I don’t remember how old my girl was, or where this occurred on the timeline of those first years. Yet, vivid moments like this therapist’s remark -still rise with clarity years later.

They can be the really harrowing events or the celebrated highlights in our lives, either way-

They stick in our memories and never ever fade. They are as vivid to us now, as the day the moment occurred.

This was one of those times…

I can’t remember exactly how many professionals we saw through the years, for what issues. It’s all a blurry foggy mess. I do remember moments like these, where I felt so defeated and emotionally drained, I just wanted to curl up in a ball and sob. Sob for my baby, for me, and for this traumatic life we were living.  Eventually we moved on- to more issues that developed and more challenges we faced in trying to rectify them all. It seemed as though when one was just being defined, a new one was emerging. I was drowning in a relentless battle to make my baby well, help her to be whole, and it would take many more doctors visits and diagnoses to put all the pieces of her puzzle together. Many of those issues are still unexplainable, but after a decade of those ongoing turns in her merciless medical mysteries, problems were solved or somehow miraculously cured. In time, we eventually landed with answers and treatments and some procedures to make my baby well.

She is whole.  She is healthy.

I thank God every single day for that.

It could have turned out differently, and I have mentally journeyed down all those paths we didn’t have to take. I often wonder about many untraveled roads I can’t even create in my mind- those unpredictable alleys and byways that I will never know- but I’m grateful for the unknown just the same. Each day I embrace the victory that rises in my daughter, and celebrate the glorious triumphant markings of who she is now- and all she can do.

But those arms? They can push through water with a fierce strength and determination I never could have predicted or planned.

I wish I’d known how this would all pan out. I wish I had the ability to see my future 12-year-old thriving with the endurance and physical might of a true athlete. I wish I had the knowledge and the foresight that despite so many debilitating challenges she had to overcome, she would make it through to the other side and not only be okay- but be a mighty warrior. A healthy, energetic, strong human being with a spirit to match.

The words of that frustrated therapist will always be embedded in the history of our struggles to get well… But I’ve learned much since that difficult day.

I’ve realized that no matter who tells you what, no matter how messages are delivered or opinions are declared- those voices will never be stronger than your own voice, unless you allow them to be. There will always be people and professionals in our lives that offer counsel and many we seek for that help we so desperately need. Even in our weakest moments, our most vulnerable and desperate places- we still get to choose how much power other people hold in our lives.

That was a hard lesson for me to learn, and I wish I could go back and revisit that dramatic day in our downstairs den.  I would change how I allowed that therapist’s influence to set fire to my worries and singe my strength for years to come. I would take back the power of her authority and the might of her message… And find a fresh new view trusting in my girl’s own story. I would not have let her voice be so loud that it silenced my own and blinded my perspective.

She almost stole my hope.

Friends, don’t let anyone ever do that. 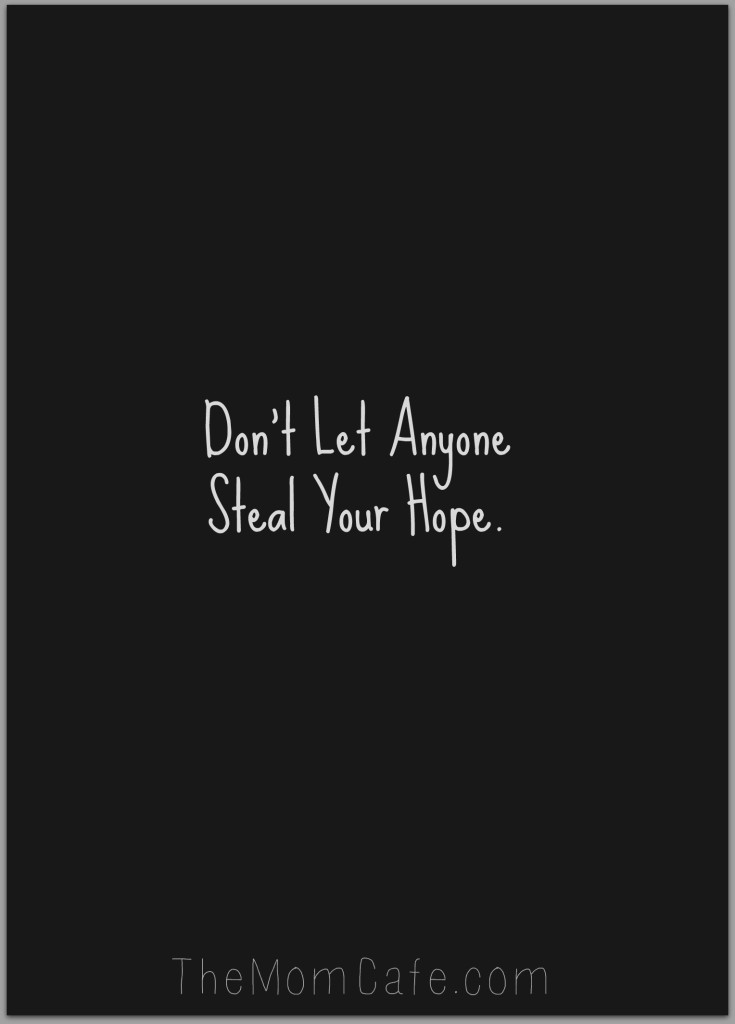