I’ve learned a lot from my daughter, as she went through sixth grade. I believe she taught me how to make it through middle school. Since the beginning of the year, I have fretted over the many issues that could possibly erupt in what many call “The Devil’s Playground”. I have prayed for her precious innocent heart to be protected as I covered my fear in faith that she of all people, could find a way to navigate around the toxic land mines that hide beneath the corridors of drama and bullying. Each day, as I dropped her off in front of a building with crowds of kids that filled the landscape, she would say “Amen” to my prayer and smile with a “I love you mom!” I would watch as she walked away entering the barrier of budding teens. I could never watch for too long, as the cars behind me pushed forward and the cars ahead pulled away…

I sighed with a tiny twist of angst, every single time. 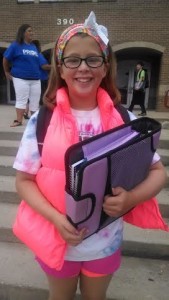 Every single day, I was impressed that she could carry herself with the perfect combination of humility and integrity, wading through the masses, going to her classes with her head held high and her heart intact. I simply was in awe of her intention to be outgoing and kind to all, with careful discernment regarding those who she politely ignored or responded to with strong conviction. She discovered serious disparity to her own values, and yet she was able to manage “The Devil’s Playground”, by walking on her own unshakable moral ground, built with a perspective of principles too strong to break.

Sure, there was some bullying. It wasn’t all nice and easy. But she was able to stand up to those kids, even dismissing an eighth grader throwing something at her, as being “ridiculous”. I would get the daily updates on goings on, as she would vent her frustrations and irritations to me after school. The culture of middle school is truly a budding ground of diversity that indeed represents the real world.

My girl succeeded through investing in her studies and flying under the radar of drama and peer pressure, by taking her own route instead. Sure, she had many friends in her classes and one close friend that she truly respected as trustworthy. But ultimately, she never belonged in any social circles or cliques… You could say she didn’t fit in, but I look at it a bit differently.

They didn’t fit in.

You see, she had no desire to join any of those peer groups.
They didn’t appeal to her.
Was she lonely at times?
You bet.

But I told her over and over again, that she was so much better off being a bit lonely, than walking through the wreckage of middle school’s wavering social circles. She had two best friends, and a family that loved her. She spent her free periods working in the office and she joined guitar club that met after school. Her passion was tied to working hard to achieve her 4.0 grade average, and she was dedicated to her swim team commitment. She bonded with her swimming peers and had her social fill through those long hard practices and weekend meets. And when the week seemed especially lonely, she always had her bestie fix on the weekends with her beloved BFF from church who goes to a different school. She adored her teachers, and enjoyed learning.

She actually loved school this year.

That’s surely saying something, isn’t it?

And here’s the best part of all…

My girl hasn’t changed one bit.

She is still the kind, loving, faithful, innocent, beautiful gift of a girl that she was when the year began.

Sure, she’s a bit more mature, more aware. But she hasn’t turned into some middle school monster, tainted by ingesting the poison of public middle school.

We finished the school year off with her performing in the all school talent show. She did not want to do this at all. Her three male guitar club teachers had heard her singing one day at practice, and told her she needed to participate in the show. They encouraged her to go for it, and they wanted to back her up with their guitar and piano playing abilities. She was uncomfortable with the idea, and I told her they must really believe in her if they asked her to do it! She had their relentless support and even wanted her to sing two songs! She politely obliged.

She grew increasingly more insecure about the entire thing, as the day came closer with the dreaded reality of singing in front of 1000 students and the entire faculty to boot. She had only sang in front of people one time in her life, when she was only 7 years old. We talked about it every day, and I continued to assure her that those teachers had confidence in her and so should she. A few weeks prior to the show, she really loathed the idea of singing two songs… so I suggested she set a limit and take out one song. Her teachers respected her wishes.

She was still agonizing over her one upcoming performance.

The decision was final, and although I supported her either way, I continued to affirm that the program was set and she needed to go forward with this despite her hesitancy. She knew she needed to as well.

The day came, and she was all nerves, as was I! I was so proud of her for not backing out, and yet so terrified for her to stand in front of all those kids and sing all by herself! Her dad took the day off to come watch her (bless his heart) and we showed up to a gymnasium packed with rowdy kids, the band warming up, and teachers attempting to simmer down the energy of the students celebrating their last day of the school year.

I found my little girl standing in the long line of performers down the hallway leading toward the stage. Little did I know, she was the only sixth grader in the talent show. The only one. The rest were buzzing with excitement, wearing flashy costumes for group dances and others were chatting and pacing while stirring with those pre-show jitters.

Cassidy stood in her place, all alone, quietly waiting.

I walked up to her and asked if she wanted me to stand and wait with her, to which she said yes.

For the next hour, we stood together while each act performed and the crowd went wild with clapping and singing and the gym was ablaze with cheers. As each act finished, my heart pounded, knowing it was just that much closer to her turn to go…

I was a complete and utter mess inside. I tried not to show it, as I kept telling her she was going to be amazing! But after each act, my throat swelled more and my knees shook, knowing my little girl was going to be up on that stage in front of all these kids.

It terrified me to think that if something would go wrong, would she just fall apart on the stage in front of the entire school?

Oh, God how I prayed. I prayed she would simply just make it through.

That hour lasted a lifetime.

“I know sweetie. I know. I’m so proud of you for following through. And I just know you are going to be AWESOME! The teachers have your back. Remember that. You can do this. You can DO THIS!”

I swear I thought I was going to pass out.

It was her turn.

I’m telling you, there was no moment that encapsulated my mother heart more than this one.

What would it be?

It was out of my hands, completely.
I held my breath, and my heart…

And my girl, oh my girl.

In her perfect quiet sweetness, her humble meekness…

And The Devil’s Playground soaked in her light.

I couldn’t think of a more perfect way to end the year.