For those who have not read my last Devotional, you might want to do that before reading this.  Read it here.

I went to the new Doctor yesterday, and found out that it is a tumor that needs to be removed.  “Tumor” is such a ugly word, isn’t it?  It evokes fear and darkness.  I don’t want to evoke or hold on to either.  Tumor is defined as basically an abnormal growth of cells that don’t belong.  Those are my own words… but I like to always frame it that way.

It’s only the size of a marble… not that big.  But apparently that doesn’t matter.

It’s on my Parotid facial gland… not, I repeat NOT Carotid.  Funny, I thought the ultra sound tech mumbled Carotid.  The doctor and I had a giggle over that BIG difference between one letter.  Yup.

Surgery will be “extensive”… due to the location of the tumor.  It took about six hours to excavate my woman parts, it will take three to cut out a little marble.  Amazing.
I had a needle biopsy to see if it’s malignant or benign.  Results to come.  My odds are good.  80/20.  Lets all root for the 80% shall we?

If this thing is malignant, my new doctor will send me off to the James Cancer Institute.  I’ve heard good things…

But I wonder if those frightened souls who were given much worse news could laugh at a thing.  I wonder a lot about those precious people that had to be told their tumor was much worse- malignant, growing fast, too late.  Those broken hearts who walked away dumbfounded to realize their new existence would be consumed with fighting for their lives.

I am deeply aware it could be much worse.  And I have a new reality that changes my view, broadens my perspective, and so passionately enriches my prayer life.  Because, once again it’s not about me.  I could make it that, and sometimes in the quiet moments I do.  Sometimes, I dip my toes in that terrifying 20%.  When I think about the phone ringing with my doctor at the other end, my entire body trembles.  When I imagine the worst, I cry out for my children most of all.

But instead, I find myself thinking about, and praying for all the people who have survived such an ordeal.  All those warriors and victors that had to face the climb of their lifetime- and through all odds, make it to the top.  Then, I think about those that suffered down the sliding brutal brush of death.   I am tormented by the devastation so many have had to face in order to survive, or surrender.

Did they have “bad luck” too?  It sounds so trivial, so fleeting, so silly to say that, when faced with life and death.  But in it’s carelessness and cleverness…  the bold stupidity of that phrase makes it funny. 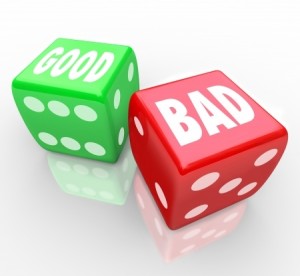 Perhaps I am the lucky one after all.

I am lucky that it was found.  I am lucky for that.

I don’t want to evoke or hold on to – fear and darkness.

So I will hold on to the Heavenly Light of Hope.